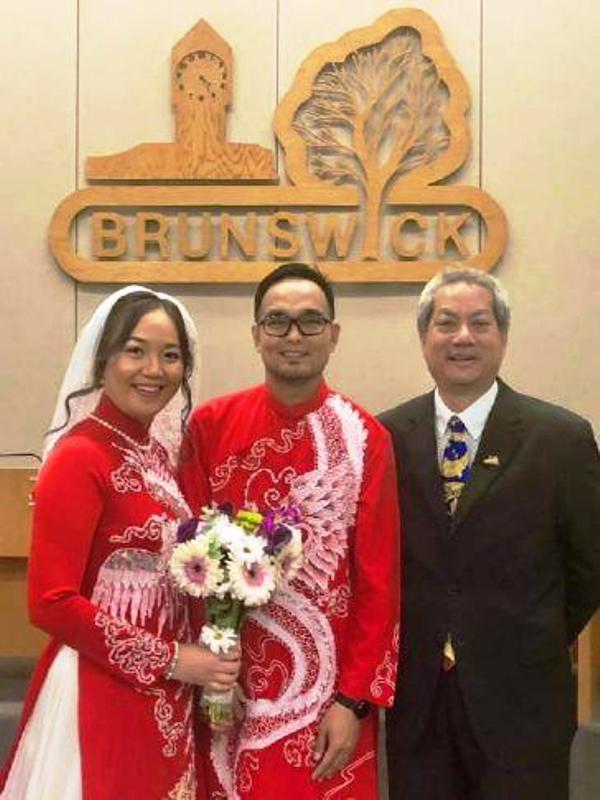 BRUNSWICK , OHIO (The Gazette) — As mayor, Ron Falconi said he has presided over a number of weddings during his time in office. And while they are not a regular occurrence, he said he’s seen it all.

“Every now and then we’ll get people who want to get married. Not that often, but it does happen,” Falconi said. “Sometimes it’s a big production. The bride comes in a flowing gown, there’s photographers and videographers, and the place is packed with people. And there’s other times where people, literally, come in from a winter day and have their winter coats on looking at me wanting to get this thing over with so they can get back home.

On Wednesday, however, Falconi officiated a wedding in which the attire of the bride and groom left him in awe.

As Rodolfo Aromin and his soon-to-be-bride Ngan walked down the aisle, Falconi and those in attendance were met with bright red, traditional Vietnamese wedding attire. Rodolfo Aromin, a friend of Falconi’s, is Filipino and Ngan Aromin is Vietnamese.

Falconi, who is also Filipino, said that while the actual ceremony itself was standard as far as how he conducted it, it was one of the most unique he has presided over because of the clothes alone.

“This was the first time that I’ve seen the bride and the groom dressed in red,” Falconi said. “I’ve never seen that before. It was very special. We didn’t do anything of the ordinary other than the beautiful gown that the bride wore and the traditional Vietnamese (clothes) for the man. He even had red shoes on. It looked pretty cool.”

In Vietnamese culture, red symbolizes happiness, love, luck and celebration. The wedding attire is called the Ao Dai and can be worn by both the bride and groom.