Canada embraced them as they fled the Vietnam War. Now, they’re saying thanks

The son of a Vietnamese naval officer who grew up in what was then Saigon, Le says he and his family led a peaceful existence until the war, waged in far-off jungles and known only to Le by the images on his television , abruptly entered the family’s lives.

“We left just before Saigon fell,” Le recalled. If they hadn’t fled, he suspects they would have languished in Saigon or worse. “My dad would be in a prison camp,” he said, facilities which the regime branded ‘re-education camps.’

“We probably would die in the jungle somewhere, being punished,” he said.

Le’s father loaded his wife and children onto a battleship to wait out the war. But as the political climate deteriorated, plans changed.

“Uprooting your whole family, your whole history, and leaving with something unknown in the future — it’s quite traumatic,” said Le.

In Philippines, the Le family boarded a tanker, its hallways and decks lined with mattresses. Makeshift outhouses served the people stranded there.

Eventually landing in the United States, Le’s father led them further north to “peaceful” Canada, which the family, “wary of war” after Saigon fell to North Vietnamese forces in 1975, embraced.

And Canada, in turn, opened its arms to Vietnamese refugees like Le, whose citizenships had been revoked by the new regime. 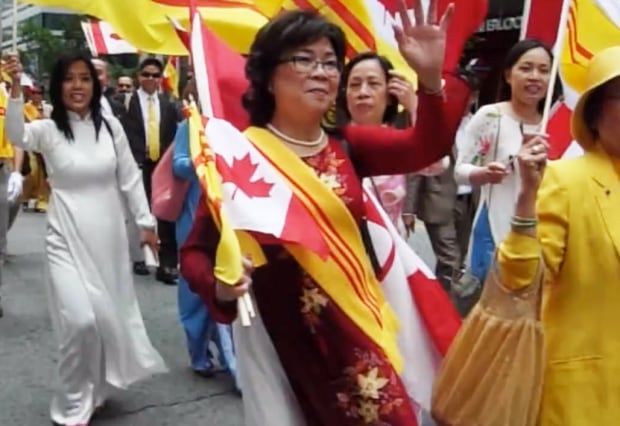 Members of the Vietnamese Canadian community march in a Canada Day event, waving the flags of both Canada and South Vietnam. (Courtesy of Nathan Li)

That’s why Le, now the president of the Vietnamese Association of Toronto, feels he should give back to the country that took him in with the Viet Summer Fest: a medley of music, food and culture meant to pay tribute to the freedom Vietnamese families found here many years ago.

But there’s another purpose for the gathering. Le fears second-generation Vietnamese Canadians, who never knew the perils of war or authoritarianism, may lose sight of the freedom their parents travelled so far to find.

‘Canada gave us a new home’

The beliefs of Nathan Ly, a 20-year-old biochemistry student who was born in Canada to Vietnamese parents, may help to assuage those fears.

“I think the war itself was very unfortunate, but it gave us a new opportunity,” said Ly.

“It’s Canada 150. It’s a time to reflect on all the great things Canada has done, and we’re one of the cases,” he said. “We came over here from our homeland, devastated by war, with nowhere else to go. Canada gave us a new home.”

Ly will join Le and a potentially big crowd of others at Nathan Phillips Square tomorrow, where he’ll play the saxophone for fellow revellers.

At 1 p.m., they’ll watch the raising of the Vietnamese Heritage and Freedom Flag, sometimes informally called the flag of the former South Vietnam, hoisted beside Canada’s own.

“We like to remind our young of our history,” said Le. “Never forget the importance of freedom, democracy, justice, human rights. It’s our duty to upkeep that in Canada and around the world.”