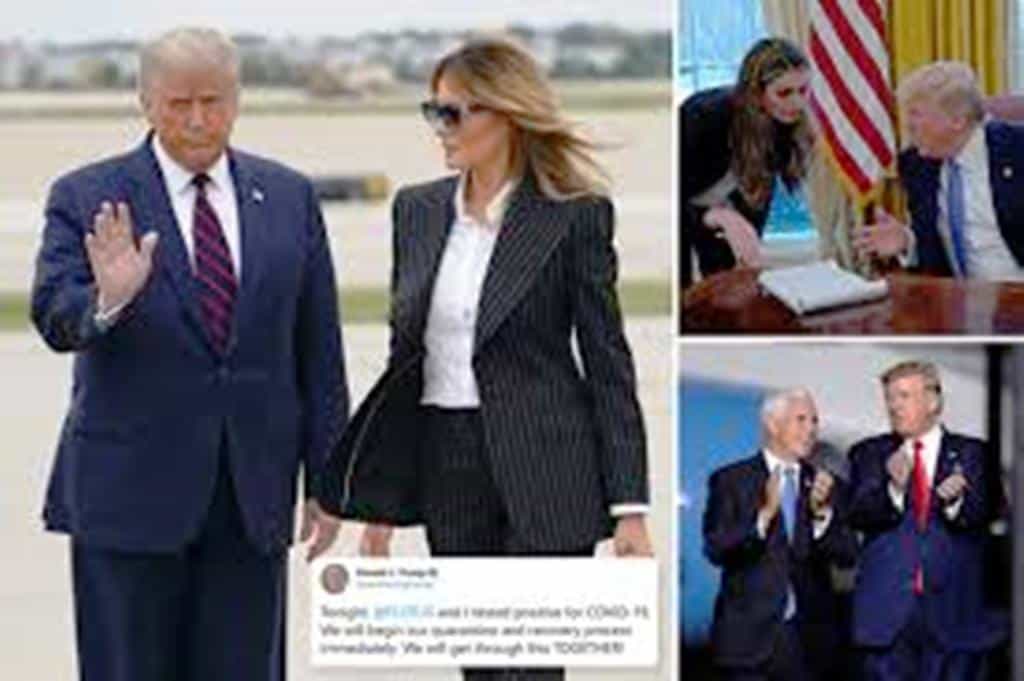 Washington ( Daily Mail): President Donald Trump and First Lady Melania Trump tested positive for coronavirus Thursday evening.
Trump is 74 years old, putting him at higher risk of serious complications from the virus. A statement from the White House doctor said both the president and first lady are ‘well at this time’ but did not say if either have symptoms.
If Trump becomes seriously ill, there are constitutional procedures that would allow Vice President Mike Pence to assume power temporarily, just weeks before the November 3 election.
But if Trump suffers mild or no symptoms, the president would be able to tout his recovery as evidence that the virus is a less grave threat than many believe.
It comes following news that the president’s top aide Hope Hicks contracted the virus after traveling with Trump on Air Force One and Marine One multiple times over the last week.
Hicks, 31, is said to have first felt unwell returning from a rally in Minnesota on the president’s plane Wednesday evening. She was quarantined away from others on the plane and her diagnosis was confirmed Thursday, according to an administration official.
Trump then continued with his schedule Thursday and traveled to and from his Bedminster, New Jersey golf resort to take part in two campaign events. He flew back to the White House on Thursday evening, when it was publicly confirmed Hicks had the virus.
Guests at the New Jersey gathering described being tested before they entered the private event.
His social media director Dan Scavino and press secretary Kayleigh McEnany, who were originally set to join him on the Thursday trip, were replaced at the last minute by other aides after coming into contact with Hicks.
Trump was last seen by reporters returning to the White House on Thursday evening. The White House had earlier distributed a schedule for Friday that showed he planned to go forward with a fundraiser at his Washington, D.C., hotel and a political rally in Sanford, Florida. That has since been canceled.
The second presidential debate on October 15 is also in doubt, while there is no word yet on whether 77-year-old Joe Biden is being tested or will have to isolate.
Hicks is one of the president’s most trusted and longest-serving aides, having worked as spokesperson for his 2016 campaign. She originally served as White House as communications director, and re-joined the administration this year as an adviser ahead of the election.
White House spokesman Judd Deere had earlier said: ‘The president takes the health and safety of himself and everyone who works in support of him and the American people very seriously.
But despite Hicks’s symptoms as early as Wednesday evening, Trump then continued with his schedule Thursday and traveled to and from his Bedminster, New Jersey golf resort to take part in two campaign events. They were held behind closed doors to a select audience.
Trump then flew then back to the White House later Thursday evening, when it was publicly confirmed Hicks had the virus.
Senior staff have been tested for Covid-19 daily since two people who work at the White House complex tested positive in early May, prompting the White House to step up precautions. Everyone who comes into contact with the president also receives a quick-result test.
In May press secretary Kayleigh McEneny described Trump as the ‘most tested man in America’. She said: ‘He’s tested more than anyone, multiple times a day. And we believe that he’s acting appropriately.’
Multiple White House staffers have tested positive for the virus, including Pence’s press secretary Katie Miller, national security adviser Robert O’Brien, and one of the president’s personal valets.
Kimberly Guilfoyle, who is dating Trump’s oldest son, Donald Trump J., tested positive in South Dakota before an Independence Day fireworks show at Mount Rushmore.
Trump, the White House and his campaign have flouted other CDC guidelines and recommendations from public health officials, and largely refused to wear masks or practice social distancing.
Instead, Trump has continued to hold campaign rallies that draw thousands of supporters.
By contrast, Biden is running a deliberately low-key campaign with social distancing at most events, no large gatherings, and conspicuous use of his mask.
Still, Trump has consistently played down concerns about being personally vulnerable to contracting COVID-19. ‘I felt no vulnerability whatsoever,’ he told reporters back in May.
Trump mocked Biden at Tuesday’s debate for wearing ‘the biggest mask I’ve ever seen’, while pulling a face covering out of his pocket and saying he wears one when needed.
tremendous number on the lungs, so it’d be interesting to check that,’ he
Trump is 74 years old, which puts him at higher risk of serious complications from virus.
With the presidential election 32 days away, the positive result means the government may have to consider contingency plans in line with the Constitution should Trump become too ill to go through with the race.
The 25th Amendment states that the vice president should replace the commander-in-chief in the event he or she is unable to continue the term.
After Vice President Pence, the next in line is the Speaker of the House, in this case Nancy Pelosi.
The president can also transfer power temporarily if he is incapacitated, before resuming his duties when he is able to. This has happened occasionally during scheduled surgeries for Presidents Ronald Reagan and George W. Bush.
According to CDC statistics, patients between the ages of 65 and 74 are five times more likely to be hospitalized with COVID-19 than someone aged 18 to 29.
Patients of Trump’s age also have a 90 times greater risk of death in comparison to their younger counterparts.

Trump was in positive territory until early April, but his ratings gradually fell as the world’s richest country suffered the deadliest outbreak on the planet.
The virus has killed more than 200,000 Americans and infected more than 7 million nationwide.