In Vietnam, Many Are Mourning the Downfall of an American Idol 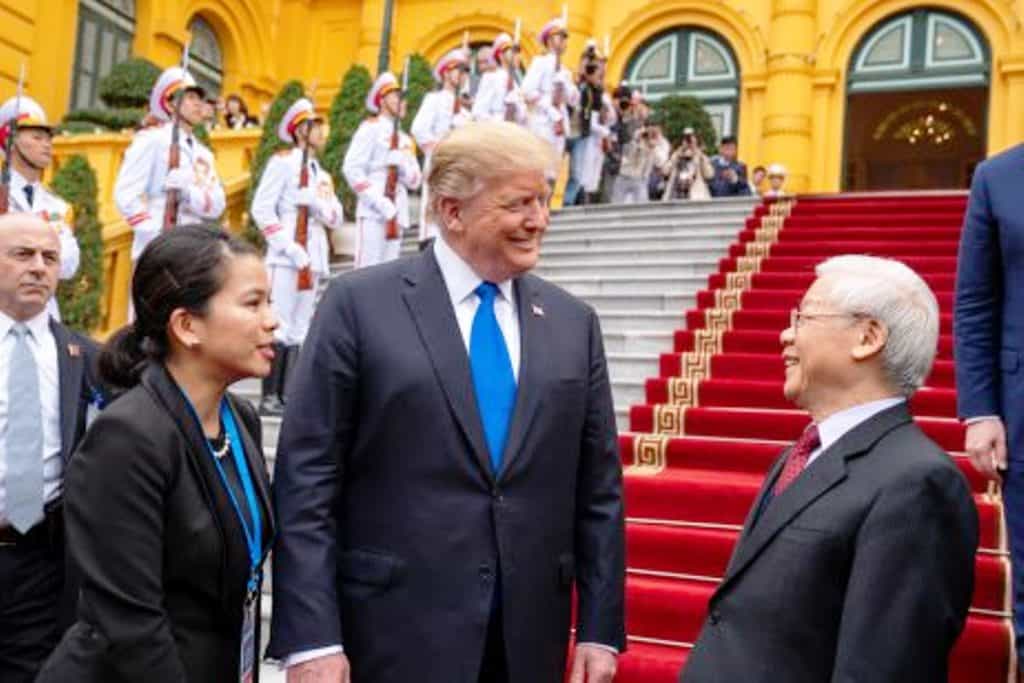 “If I could die for Mr. Trump to become the President,” wrote one Vietnamese Facebook user, “I would be very willing to do so.”

(The Diplomat): Absurd as it may sound, the poignant statement in the subtitle of this article was not made by an American Trump supporter but by a Vietnamese Facebook user, upon learning that the incumbent president had lost the U.S. presidential election to former Vice President Joe Biden. While watching the election, many Vietnamese asserted an adamant belief that their “idol” – Donald J. Trump – would win a second term in office. We have talked with some local people and observed their interactions on social media in an effort to decipher this phenomenon.

One widely shared observation, summarized by Le Hong Hiep in a recent interview with Viettimes, is that many Vietnamese see Trump’s assertive policies toward China as beneficial to their nation. Trump’s harsh stance toward China has resonated with public grievances and earned the president significant credits among the Vietnamese public.

This is the most obvious reason for Vietnamese people to be pro-Trump, but far from the only one. “Trump is a powerful, confident, and even authoritarian businessman. Everything he does is strategic and calculated,” Vuong Toan Hiep, a 41-year old supporter of Trump residing in Hanoi, told the authors. Agreeing with Vuong, Truong Xuan Thai, a citizen in his 80s from Hoi An, opined, “The President of the U.S. should be unequivocal, charismatic and tough! Compared to Biden, Trump is absolutely a better fit.”

This celebration of Trump’s virtues could be read in the light of perceptions of leadership that are deeply rooted in Vietnamese political culture. The undercurrent of Confucian tradition running through Vietnamese society may have shaped the way the people evaluate an authority figure by reason of their virtue.
Meanwhile, the sense of political cynicism that pervades Vietnam’s domestic political environment is intertwined with the favorable sentiments many people have for Trump. “People are tired of deceitful and manipulative politicians,” Vuong said, in explaining why he preferred Trump to Biden. The opinion is echoed by a 46-year old Vietnamese government official who chose to remain anonymous. “I like Trump exactly because he is not a politician. He says whatever he thinks and lives up to his promises,” the official said. The unspoken part of his statement is that Trump is unlike other politicians who speak empty words and make empty promises. In other words, the predilection for Trump is derived right from a widespread Vietnamese dissatisfaction with the performance of their nation’s politicians.

President Trump has a strong fan base in Vietnam, comprising tens of thousands of local people on Facebook, the most-used social media platform in Vietnam, which boasted some 45.3 million active users as of 2019. In addition to talking about Trump, Facebook users involve themselves in heated conversations regarding myriad political issues that just a decade ago would have been considered sensitive and peculiar to private settings in Vietnam. These include the South China Sea disputes, the legitimacy of the communist regimes in Vietnam and China, and the possibility of a U.S.-Vietnam alliance, to name just a few.

“The Chinese Communist Party is a terrorist group! The world, let’s unite and eradicate Communism…a new form of fascism.”

“I think I’d better go study Chinese now. We will soon lose the islands in the South China Sea.”

“If President Trump could remain in office for another term, probably, the Vietnamese people will be able to achieve democracy, which is being suppressed by the Communist Party.”

The above expressions are found on popular Facebook platforms for Vietnamese Trump supporters, such as the group “Vietnamese Supporters of President Trump” and its adjunct page “Platform for People Who Love Donald Trump.” Both of these are administered by a Vietnamese American living in San Jose. Interestingly, the page originally went by the name “Stop the CCP Virus.” Not coincidentally, San Jose is also the home of Viet Tan, a reactionary anti-communist organization well-known among the Vietnamese public.

Reactionary groups based abroad have long been blamed for calumnies against the Vietnamese Communist Party (VCP) and for stoking recent episodes of political unrest, such as the environmental protests of 2016 or the anti-China demonstrations of 2018. The inexorable rise of social media in the country has granted these actors a better channel to exert influence on Vietnamese public opinion. The Vietnamese government has good reason to be worried: sandwiched between content lauding Trump on these Facebook groups/pages are polemics against communist regimes, which threaten to besmirch the legitimacy of the VCP.

“Vietnamese people are extremely vulnerable to the populist rhetoric of Donald J. Trump and conspiracy theories spread by these pro-Trump Facebook pages,” Rosie Nguyen, a Vietnamese author currently pursuing a master’s degree in communication studies in the U.S., told the authors. “Low media literacy and the peripheral route of processing stimuli are the main precursors.”

Even with legal and policing mechanisms (such as the Law on Cybersecurity 2018 and Force 47) already in place, it is far from sufficient to prevent the Vietnamese people from being exposed to a much more diverse pool of information. As Giang Nguyen-Thu of the University of Queensland noted in a recent research paper, “The key strategy of digital governance in Vietnam is still punishment-based… But given the daily production and coordination of an immense amount of data online, it is impossible for this strategy to alter the formation and amplification of collective grievance and ordinary dissent,”

Since Trump’s defeat, some of his Vietnamese fans refused to accept the result, blaming official Vietnamese outlets for spreading “fake news” – a term popularized by Trump. Eventually, everyone will have to move on. Nevertheless, after this event, the Vietnamese public will continue to see social media as not only an alternative gateway to political information but also a new public sphere in which to articulate opinions more freely.