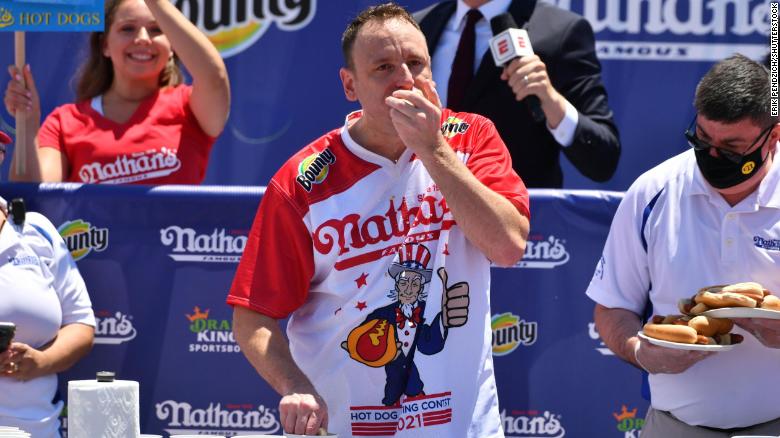 It was the 14th time the top-ranked hot dog eater in the world won the title in the last 15 years, slinging down 26 more than second place finisher Geoffrey Esper and one more than Chestnut managed last year.
On the women’s side, Michelle Lesco, ranked ninth overall, picked up her first championship after consuming 30 3/4 hot dogs and buns, 6 3/4 more than runner-up Sarah Rodriguez.
Miko Sudo, the defending seven-time champion, did not compete this year as she’s expecting her first child later this month. Sudo set the women’s record in 2020 when she ate 48.5 hot dogs and buns.
The annual Fourth of July event took place in front of spectators in Coney Island.
Last year’s contest was held in a private location for media only due to the coronavirus pandemic.
According to Nathan’s, legend has it that the first contest of its kind was held on July 4, 1916, as four immigrants competed to show how patriotic they were by eating hot dogs at Nathan’s stand in Coney Island.
The contest has only been recorded since 1972.