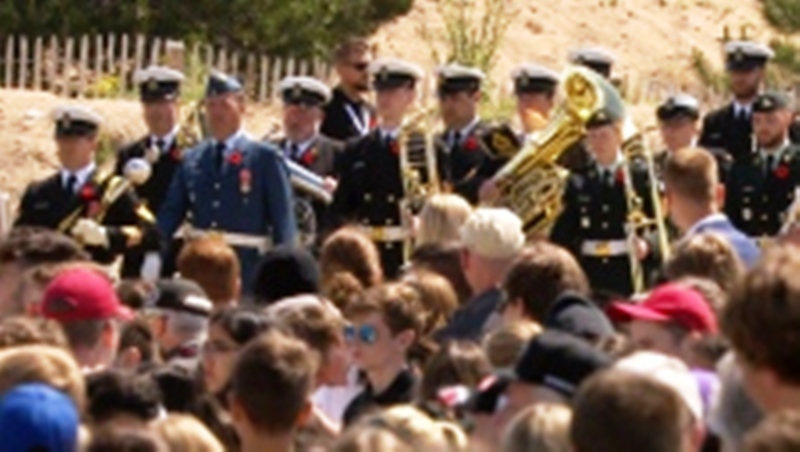 COURSEULLES-SUR-MER, France (CTV): — Thousands of Canadians are gathering on a stretch of beach on the coast of Normandy in France on Thursday to commemorate the 75th anniversary of D-Day, one of the most pivotal days of the Second World War.

It was on June 6, 1944, that 14,000 Canadian soldiers — men from across the country and all walks of life — stormed ashore under withering German fire to begin the long-awaited liberation of Europe from the Nazis.

In the pre-dawn hours before the invasion and after crossing the English Channel under cover of night, the Canadians, as well as their British and American counterparts, loaded into landing craft to prepare for the assault.

“We got in those boats and the coast was terrible,” recalled Joseph Edwardson, who was 20 on D-Day and a member of the Royal Regina Rifles, one of the first Canadian units to step foot in Nazi-occupied France.

“It was a bad, bad morning. And the water was splashing into the craft and they were starting to take water, so we had to use our helmets to bail some of the water out.”

And then the attack was on. Richard Rohmer, a young Canadian pilot had a birds-eye view of the invasion while flying over the beaches as the landing craft, supported by the heavy guns of Allied warships, approached the coast.

“The site was fantastic: Guns firing from the naval destroyers and ships, landing right over where we were flying at 500 feet,” said Rohmer, who later rose to the rank of major-general in the Canadian Forces.

“It was fantastic to see the incoming ships, the incoming landing craft and the explosions of the battleships that were firing right where we were flying. ΓÇª It was quite a day.”

But the Allies weren’t the only ones shooting. The Germans had long prepared for an attack and now opened up with machine-gun and artillery, while some of the Canadian landing craft hit underwater mines.

Jim Parks was on one such landing craft and was forced to dive off into four metres of water and swim for shore. Once there, he helped pulled wounded friends to safety, some of whom would die on the beach.

“One guy was Cpl. Martin, he was from somewhere in Manitoba,” remembered Parks, who like the others is now in his mid-90s. “He’d been shot in the chest and his lungs, so he just died right there in our arms.”

Before D-Day was over, 359 Canadians had died, more than double the number that died during the entire war in Afghanistan. Another 715 had been wounded or captured.

But the carefully planned invasion was a success and would mark a turning point in the Second World War. The Canadians and their Allies had broken through Hitler’s Atlantic Wall and established a foothold to start liberating the rest of Europe.