Wiltshire , England (The Guardian, Aug 12,2017):Three men have been jailed for their part in running a vast underground cannabis farm in a former nuclear bunker in Wiltshire, staffed by young Vietnamese workers who were held in slave-like conditions. 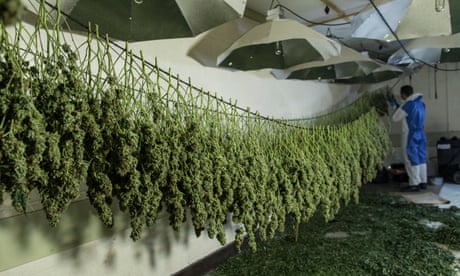 As the sentences were announced, anti-trafficking organisations said they were concerned that slavery charges against the three had been dropped despite investigators’ certainty that four Vietnamese men were discovered locked inside the site with no access to keys.

Martin Fillery, 45, Ross Winter, 30 and Plamen Nguyen, 27, pleaded guilty in June to conspiracy to produce class B drugs and abstracting electricity to power the cannabis factory in 20 of the 40 rooms of a decommissioned Ministry of Defence bunker, RGHQ Chilmark. Fillery was sentenced to eight years and Winter and Nguyen were each sentenced to five.

The farm was understood to be capable of producing £2m of cannabis every year. Police estimate that £650,000 of electricity was siphoned off illegally from a nearby electricity pylon to power hundreds of lights and fans.

Det Insp Paul Franklin, who helped uncover the bunker, said he was clear that the Vietnamese men working there were enslaved and extremely scared. “It was slavery,” he said in an interview this week. “There’s no doubt. They weren’t there by choice. They were trafficked from Vietnam, they were placed there and told to work.”