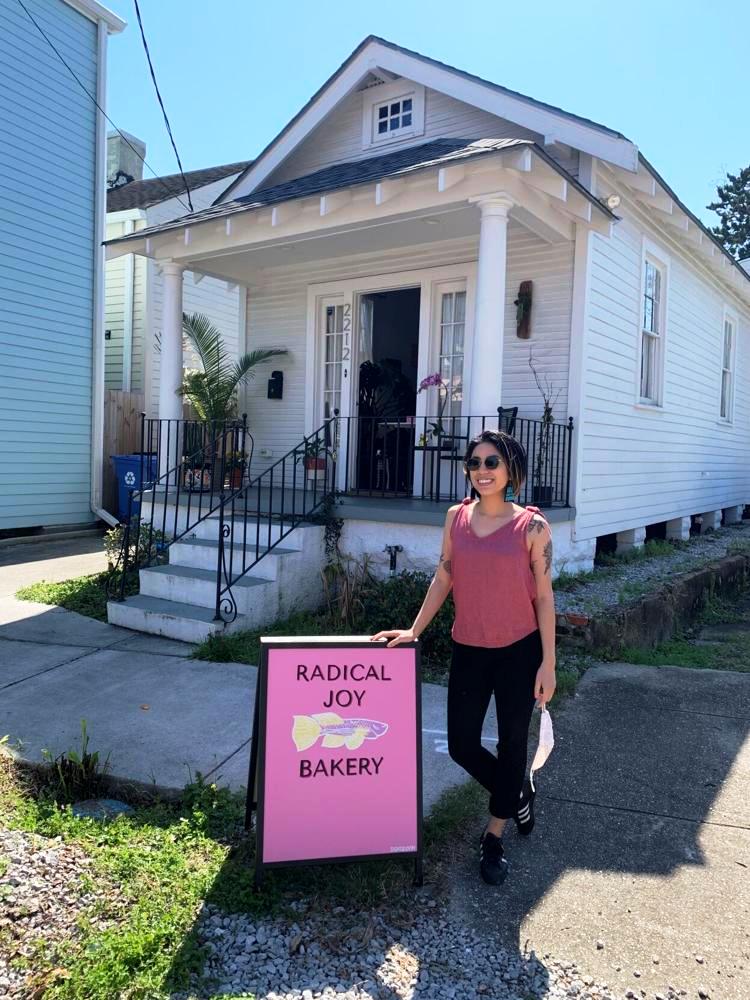 Vivi Nguyen grew up in southern California and lived in several areas of the state before she moved to New Orleans last summer. After working for nonprofits and in journalism, she started her own baking business, Radical Joy Bakery. She makes cakes, cookies, mochi brownies and other vegan treats by direct order and at pop-ups. She’s also worked with a team of women to present brunch pop-ups featuring mainly vegan Vietnamese dishes. She’s socially active, from donating goods for community refrigerators to participating in recent rallies protesting anti-Asian hate. Radical Joy Bakery pops up at the Bayou Yacht Club market on Saturday, May 1, at Dumaine and Moss streets, and at Undergrowth Coffee (4332 Magazine St.) on May 8.

Gambit: How did you get interested in baking?
Vivi Nguyen: I started baking at 15, because I left home at 15 and baking was a way for me to ground myself and to create something and have moments of joy at a time that was hard for me as a youth. The first thing I made was banana bread, and I still bake it to this day.

Baking and cooking was something I did for myself and my friends. Folks had birthdays and started getting married, and I am someone that cherishes acts of service and giving people things that are meaningful. For a lot of my friends, I started providing birthday cakes, inspired by things they really like. I have a friend who really likes Guinness, so I created a Guinness beer cake for her birthday. Another friend got married — she actually eloped without her parents knowing. They didn’t have much money to get married, so I was like, “Don’t buy a wedding cake. I’ll make you one.”

Gambit: How has Radical Joy developed?
Nguyen: I started experimenting with cookies and mochi brownies. Friends started ordering them from me. And it was like, “Oh, wait, these are really good.” I started shipping cookies and doing pop-ups.

I had no idea I was going to start a bakery. I just want to be happy. I want to have a space where I feel I am connected with a community and there is something I can do with my hands.

I started making cakes, and they just blew up. Making cakes for me is about people celebrating any special moment in their life — just being alive, opening a business or celebrating their birthday. The way I go about my cakes is I tell people these are the signature flavors that I have, and I also have a build-your-own-cake menu. It started with me asking people, “Tell me about the person this cake is for.” And they’d tell me their favorite song, or this is why I love them so much. That would be the inspiration for the cake. it’s a very personal experience.

There was a couple and the woman wanted to commission a cake for her boyfriend. They explained they have only been living in New Orleans for a couple years. One of them wanted to become a baker and the other wanted to become a musician, and they felt that New Orleans was the right place for them to do that. They got a lot of disapproval from their family and friends and were taking a huge risk (in moving here). Now they’re both basically working hard toward their dreams. It was about three weeks after Mardi Gras ended, and I made it in a Bundt shape, and I think I was influenced by seeing so many king cakes. It was an olive oil chiffon cake. I free-styled it with rose water and turmeric buttercream because I really like floral notes. I decked it out with tons of edible flowers that I sourced from local farmers. This cake is a celebration of these people starting their new lives, and they’re adventurous.

I experiment a lot. I also make vegan muffins. My mochi brownies are vegan and gluten free.

Vegan cheesecakes are a big one. I don’t make them all of the time because it’s labor intensive to make a cheese-like thing without cheese in it. I made a vegan pumpkin cheesecake back in October and November and people really liked that, so I think I’ll do that again in the fall.

Nikki Thompson started making her own ice cream during the pandemic. Though she moved to New Orleans six years ago to work as an interior desi…

Gambit: How did you come up with the name Radical Joy?
Nguyen: It comes from a book called “Pleasure Activism,” which is written by a Black queer feminist (adrienne maree brown). It really resonates with me because the world feels like it’s burning down, and there are so many things we could be doing and there isn’t enough time. And sometimes it’s overwhelming and you can get burnt out. I was thinking, “How can I make this work joyful?” One of the ways that we can think about the issues of the world and our place in it in a way that is joyful is looking to people, or causes or movements that are doing that work, so it doesn’t feel like we’re doing everything alone. Why is it so radical to be happy? As a person of color, as a queer person, it is really radical to be happy, because sometimes the system doesn’t want you to (be) — it’s weighing you down. The reason I started the bakery is because I have gone through so many things in my life. I have been houseless. I have been alienated from my family. I have had to deal with harassment. I just decided it is a huge risk for me — I was doing my salaried job, but I was not happy. I took a huge risk in opening the bakery. That’s why I call it Radical Joy. This is a radical act for me to basically bet on myself and for other people to believe in my dream.