We the North: Let’s Go Raptors! 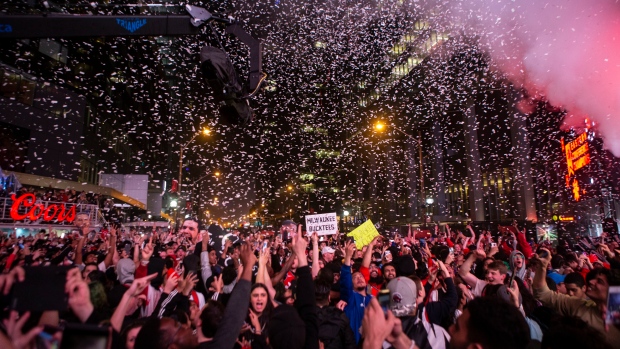 Toronto: The Toronto Raptors finally did it — they’re heading to the NBA Finals for the first time in franchise history.

In front of the 233rd-straight sellout at Scotiabank Arena, a wild and raucous crowd, the Raps finally broke through. They beat the Milwaukee Bucks four-straight times, including Saturday night’s Game 6, to clinch the Eastern Conference finals.

The victory sent Toronto sports fans into a jubilant frenzy.

They spilled out of Scotiabank Arena after the game, joining a celebratory wave of thousands more in Jurassic Park and in downtown city streets, dancing, chanting and cheering.
The Raptors will play in the NBA Finals for the first time after beating the Bucks 100-94 in a historic game that saw thousands of fans spill out of Jurassic Park, the outdoor fan zone, and into the streets that surround Scotiabank Arena.
A sea of fans chanted “We the North” and “Let’s go Raptors” while police cars, TTC buses and streetcars honked in celebration.